I am not advocating for socialized medicine or even single payer, but it is important to distinguish between the two. The Economist this month had a great article on the different setups we see today.

In this system, private insurance pays private doctors. There is no interference from the government but there is also no assurance that everyone can afford coverage. No one seems to have this set up, though the US was close prior to the affordable care act.

In this scenario, privately employed physicians are paid from a single source. This would most likely be the government. The government doesn’t regulate how a physician could practice directly, but presumably could through the power of the purse influence how medicine is practiced. This is single payer.

This scheme is used in France and Canada but also in the US through Medicare. The government pays independent physicians. The government can ensure that everyone receives coverage.

In this scenario, both the payment and the employer of physicians are one single source. This will usually be the government. This can lead to some efficiencies, where payment can be directly tied to employee performance and there are less administrative costs of having to manage different insurances. This is socialized medicine.

This model exists in Britain, Italy, Spain, Sweden and the US’s Veterans Administration. In this case, the US government pays the doctors who are also employed by the US government (employees of the VA hospital).

This is a modification of the first model where both the physicians and the payers are independent from the government. The government does step in through

This is of course the model of the Affordable Care Act. It is a totally private system with government intervention. We also see this in the Netherlands and Switzerland. 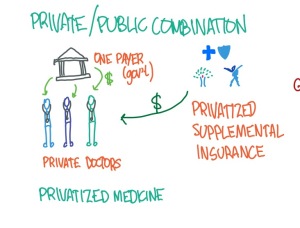 In this system, independent doctors are paid by a single payer. There are usually a limited amount of services available. If you want more care, you can buy secondary insurance from private insurers.

This model exists in Germany.