For me, the most important image from Greg McKeown’s book “Essentialism” is a circle with “energy” at its center. In one circle, energy is expended in several directions. No net progress is made when adding all these vectors. In a second circle, all the effort vectors are aligned. Adding these vectors takes you somewhere. Your goals determine in which direction you point your effort.

There are three steps to determine what your goals should be:

The first step is to explore many opportunities. This reminds me of Jim Collins’ “bullets not cannonballs” analogy from “Great By Design.” In this story, you are on a ship being approached by pirates. You have slightly more than enough gun powder to fire one cannonball but not two. What do you do? If you fire the cannonball at the pirates and miss, you are defenseless. Instead if you take a small amount of the gun powder to fire much smaller bullets in order to determine trajectory and angle, you gain valuable information about the direction in which to point the cannon. Armed with that knowledge you can now fire the cannonball and sink the oncoming pirate ship. In this analogy the gun powder is your effort and the trajectory is your ultimate goal. Expending a little bit of gun powder (effort) is well spent in order to gain valuable insight about trajectory (goal). This investment in time may prove valuable in the wasted time in prevents.

Now that you’ve tried several opportunities, you need to pick where you want to point your efforts. You cannot do everything. There is always a tradeoff. If you say yes to one thing, you need to say no to another, do both poorly or run yourself ragged trying to mange both. I was always told the way to pick your job was to find the intersection of that which you love, that which you’re good at and that which the world needs. Years later I found this image, everyone has an “ikigai” (a reason to get up in the morning). It adds something for which the world will pay you (that for which there are opportunities available) to my original model. 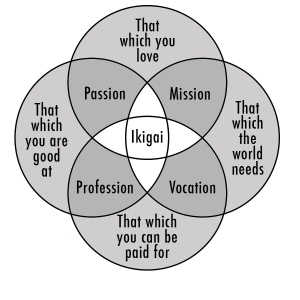 Once you determine what your priority is, eliminate everything else. Be ruthless in avoiding things that don’t make progress toward your goals.

Once you have decided on a heading and disentangled yourself from all extraneous jobs, try to make work as effortless as possible. Remove all obstacles.

To do the latter, determine the desired result of a job. From there, figure out where you can apply the least amount of effort to get the most work done. The job doesn’t have to be 100% perfectly complete, but can be 80% done. Then move on to the next job.

I still find it hard to say no. I think it’s the EM mindset to see a problem and fix it, instead of selfishly staying where I know I can do myself a favor by turning a blind eye to a problem I could fix. That’s not the way to get ahead, though.

View all posts by Rahul