Dan Roam, the author of a business book called “Back Of The Napkin,” wrote a second book called “Blah-Blah-Blah.” Though the title doesn’t suggest it, the book is about effective communication using a combination of verbal and visual methods and how to link the two. This is an integral part of the digital whiteboard lecture experience, so it’s worth looking at what Mr. Roam has to say.

What we’re ultimately trying to do is help our students create connections and find relationships. Sometimes these relationships are hard for the student to create on their own, so they need assistance from the teacher. Dan Roam shows us how to depict various relationships pictorially. Pictures alone often aren’t enough. They do warrant explanation.

We’re told that we are either visual or verbal learners, but the truth is most of us are probably a hybrid of the two. The verbal aspect (anthropomorphized as a fox in the book) relies on linear and logical structure. The visual aspect (depicted as a hummingbird) is more free-form, making non-linear leaps and connections. Pairing the two successfully increases the likelihood that everyone will understand the material presented. This pairing is what Mr. Roam calls VI-sual V-erbal InterDependent (VIVID) thinking.

Most of us are fairly comfortable with words (as we’ve been using them within bullet points on slides for years and years) but we’ve neglected the visual skills since 3rd grade. We are familiar with verbal grammar: nouns, verbs, adjectives, etc. The book supplies the tools to translate between verbal grammar to pictorial representations: vivid grammar.

I think the best way to do this is to step through an example. Since I’m creating my spider bites video, I’ll use this as an example.

Nouns and Adjectives (“What?”)

Nouns should be easy to depict with a picture. You don’t have to be able to draw well, just do your best attempt at a stick figure. If you have no idea where to start, you can search for images of your item and “cartoon” in a search engine for ideas.

Here’s an example of my black widow spider. It’s nothing special. Descriptors of nouns (adjectives) can also be included in this picture. For example, for black widow spiders it’s only the females that are poisonous due to their long fangs. So here I drew eyelashes on the spider and long fangs. Now without an explanation, this anthropomorphization of the spider may not make sense. However once you know that it’s the long-fanged females that are able to penetrate deep enough to deliver the venom, this picture will always be associated with that meaning.

Numerical Relationships (“How much?”) 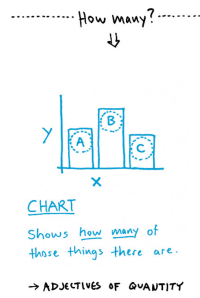 Explanations of comparisons of value are best done with graphs. This is obvious as we use this often in our texts. Drawing a bar graphs isn’t difficult either. I don’t think this fact is important enough to include in my video, but if I wanted to depict how many different kinds of spiders there are compared to the number of ants, I could use a bar graph. 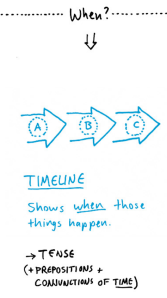 Temporal changes are depicted best by a time line. For example the progression of symptoms from a bite by a brown recluse spider progresses from a painless bite initially, then turns into a Bull’s Eye lesion 2 to 8 hours later. It has an erythematous center, an indurated ring and an outer cyanotic circle. Finally 5 to 7 days later, an eschar forms.

The grammatical construct he associates with this is tense. 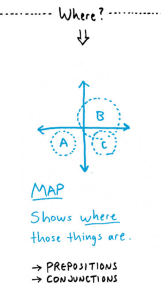 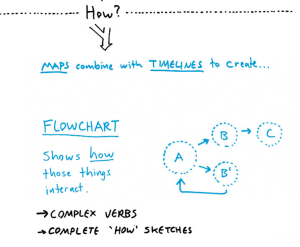 To describe where things are in relation to others, you use a map. For instance, you could use a map of the US to show where the killer bees live.

Descriptions of how things happen (verbs) are described via a flow chart. We’ve seen many of these. Think of the ACLS guidelines flow charts. Or the management of suspected PE. 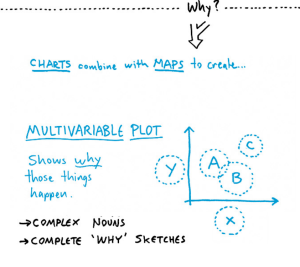 More complex relationships can be depicted via a multivariate plot. This is the “why” question.

I could go on, but it’s probably better to read it from Mr. Roam himself. I’m going to try out some of these ideas. Check out the book and if you have any questions put them in the comments.